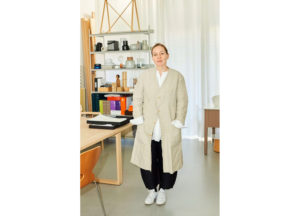 Cecilie Manz was born in the Odsherred region of Denmark. As the child of parents occupied with art and design, designing always formed a natural part of her life. She chose design as her living when she began studying at the Danish School of Design in 1992. Her great interest for function and conceptualization took her further as an exchange student to Helsinki where she attended the Finnish University of Art and Design. In 1998, a year after she graduated from the Danish School of Design she started her own studio, Manz Lab, the centre of her work ever since. Already, Cecilie Manz has exhibited all over the world and is permanently represented in the exhibitions of MOMA and the Danish Design Centre. She has been lectured and awarded several significant prizes for her conceptual design.